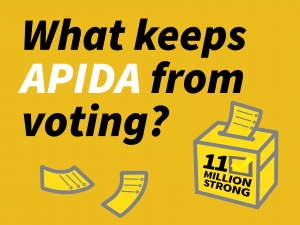 In the 2016 presidential election, only 49% of eligible APIDA voters voted.

Here are the key reasons that keep the APIDA community from the ballot box:

These reasons can be seen in the 2018 midterm elections in Georgia. It was reported that polling places were consolidated or taken down, but voters were not alerted. Due to the lack of translated materials and interpreters, many APIDA were not properly informed or instructed about alternative polling places and voting procedures.

Also, Georgia follows the practice of “exact matching” in which the names of voters on their voter registration must match the IDs from the DMV or Social Security Administration. This policy significantly impacted members of the APIDA and Latinx community because their names do not follow romanization. This policy led to the significant purging of votes cast by the members of the APIDA community.

What happened in Georgia illustrates how the practices of voter suppression directly impact the ability of APIDA and other communities of color to gain a significant foothold in the American electorate.

To combat voter suppression, we must continue to empower APIDA with information and resources so that their votes will be counted and be recognized as legitimate members of the electorate!