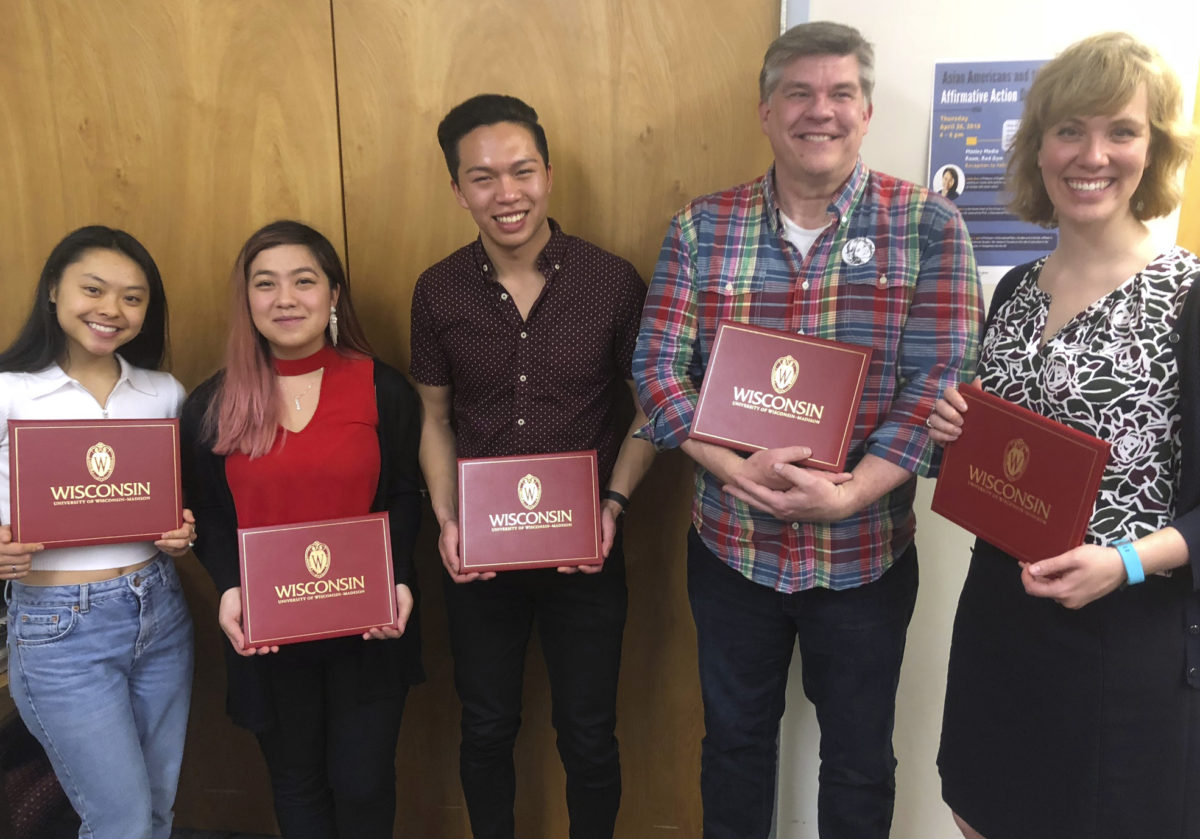 In honor of the memory and legacy of our beloved founding director, Professor Amy Ling, the Program in Asian American Studies is proud to offer five 2018 Amy Ling Yellow Light Awards to enrolled UW-Madison students. We had such a strong pool of candidates this year and we are so very proud of our award winners. Please stop by, grab a slice of pizza, and congratulate our award winners at our Pizza Party!

Riley Tsang is a third-year student studying Social Welfare Policy with two certificates in Asian American Studies and Global Health. At UW-Madison, Riley works to organize and advocate for the Asian Pacific Islander Desi American (APIDA) community. He serves as the chair of a student run initiative to create a cultural center for APIDA identifying students, and believes that creating institutional spaces for students with marginalized identities helps to build interethnic and interracial coalitions to make social change. Riley has been involved in other UW programs and has served as a House Fellow, an Our Wisconsin facilitator, and a subcommittee chair for APIDA Heritage Month.

Kimberly Vue is a graduating fifth-year senior from Sheboygan, WI, majoring in Social Welfare with certificates in Education and Educational Services, Integrated Liberal Studies, Asian American Studies and Leadership. Kimberly is a daughter of Hmong refugees, a first-generation college student and a proud CeO scholar. Additionally, Kimberly currently serves her community through her positions as President of alpha Kappa Delta Phi, the Asian-Interest Sorority here on campus, Safety and Wellness Chair of the Multicultural Greek Council, a Student Ambassador for APIAVote, a Children’s Program Activity Planner volunteer for the local YWCA, a tutor for the PEOPLE Program, Student Supervisor for the Wisconsin Union, and Workshop Facilitator for Relationship FLAGS, a workshop which aims to build awareness around dating violence, bystander intervention, and resources for survivors of violence. Additionally, throughout her time here at UW-Madison, she has previously served as an undergraduate research assistant for the Educational Pyschology’s PRESM Lab, studied abroad in Spain and Morocco for the UW Global Health Human Rights Training Course on how to combat human trafficking, placed third in the Rec Sport’s Intramural Ultimate Frisbee tournament, and taken a bite of the largest rice crispy bar in the world–made right here on campus.

Alyssa Hui is a first-generation college student majoring in Journalism and Mass Communications with certificates in Asian American Studies and Gender and Women’s Studies. As a Chinese-American womyn from the Southside of Chicago, she hopes to recognize the experiences of Asian/Asian Americans and to show support for a community that can be easily ignored. Outside of academics, she likes to invest time in student organizations such as Chinese American Student Association (CHASA), Asian American Inter-Varsity (AAIV), WSUM Student Radio and The Daily Cardinal. In addition, Alyssa enjoys writing, photography, traveling, and drinking boba tea.

Check out her work “Do You See Me Now?” on YouTube!

Joy Block is a doctoral candidate in U.S. History at UW-Madison, studying South Asian American immigration and settlement in the early Cold War era. Building on her Master’s work in South Asian history, she explores how South Asians navigated international and transnational networks, including U.S. funding streams for educational development in India as well as higher education opportunities for Indians at U.S. universities. She enjoys teaching Asian American history classes and advising undergraduate writers at the History Lab, because telling historical stories and teaching others to do the same are two of her favorite activities.

Jeff Butler was born and raised in Madison. He graduated from Madison West High School in 1976 and studied Art at the UW-Madison, until he left college in the early ‘80s to pursue a career in art. Today, Jeff continues to freelance, while also teaching at Madison College. In the spring of 2018, Jeff returned to the UW to complete his Bachelor of Science degree. He hopes to graduate in the fall of this year.

Congratulations again to our winners!