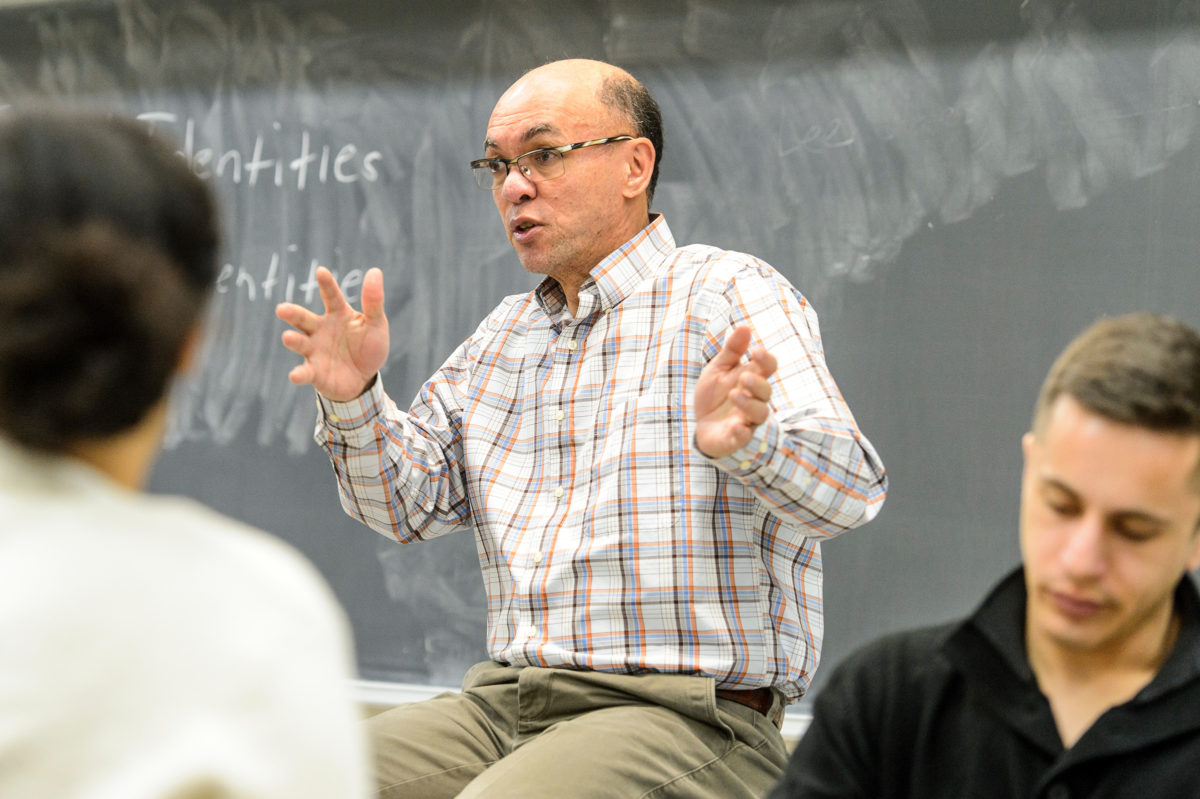 Michael Thornton is Professor of Afro-American Studies and Asian American Studies. His interest, both personal and professional, is related to how and why people cross boundaries, particularly racial and cultural.  (Photo by Bryce Richter / UW-Madison)

Michael Thornton says he got his education in the school of hard knocks (before he got his Ph.D. at University of Michigan.) Growing up in a military family, he had to pull up stakes often, and knows what it’s like to live on the wrong side of the tracks.

For the past 28 years, Thornton has been teaching Afro-American studies at UW-Madison, where his chosen field of research — how communities of color interact with each other — is respected, he says. As someone of African-American and Japanese-American heritage, Thornton’s research focus is a natural outgrowth of his life experience. And in teaching “Introduction to Contemporary Afro-American Society,” Thornton works to enable his students to analyze classroom concepts through the lens of their own life experiences, and maybe transform their perception of themselves in society.

Thornton, 66, was one of 12 campus faculty members to receive a Distinguished Teaching Award this year. It has left him feeling grateful for the challenge of guiding students through issues surrounding race on a predominantly white campus.

“I feel l blessed and privileged to do what I do. Growing up poor, I never thought I’d end up a professor (at a) first-class university,” Thornton said. He sat down with the Cap Times to talk about how he helps students learn.

Who takes your classes?

Primarily those fulfilling the ethnic studies requirement. There’s a heavy emphasis on students in the sciences, and they put it off until the last minute, so I get juniors and seniors primarily, even in the introductory courses.

Are your students primarily white, as the student body is predominantly white?

Do you encounter students who may not be excited about the subject matter or are not ready to apply themselves?

How do you get students excited about the subject matter?

That’s the challenge and I like the challenge. My introductory course is a service learning course. Students are required to work 25 hours with a local nonprofit organization. They actually interact with the community, usually children they tutor, and they hear their stories and document that, and their own feelings as the change, in their journals.

By the end of the semester, five or six may continue at the volunteer site, and others change their major because impact it has had on them. It’s heartening at the end — a lot of them talk about how the experience has transformed their lives.

I’ll sit in my office crying while I’m reading their final papers. They are unlike any other final exam you’ll have. It’s a very personal journey based on academic ideas they’ve learned and personal experiences and relationships they’ve had at the site.

You’re moved by that personal growth.

What’s important to me is that they learned so much about how much power they have.

Is part of it realizing the power they have as white people in our society?

That’s true, but it encompasses more than that. Many of them don’t think they have ANY power. Over the course of the semester they learn about social class, race and privilege, gender and privilege, and they open up to possibilities they never thought about before.

How does volunteering fit in with the academic content of the course?

They’ll read about prejudice. And before they go to volunteer at the site in communities that are primarily working class and heavily people of color, many write that they are afraid to go, they think the kids won’t like them because they’re white, because they are middle class or upper class.

Eventually they turn the lens of prejudice on themselves: “All those things I said were prejudgments about people. Those are ideas I never thought I had.” So they have these ‘aha’ moments across the semester when the course content becomes very personal for them. I drive home that it’s okay to feel, it’s okay to be angry, it’s okay to be confused about what you’re learning. The bottom line is it doesn’t make you bad or good, but you have a better idea of who you are in the context of your society and as a citizen.

What are some typical readings?

Given today’s population they are articles, YouTube videos and a lot of other kinds of stuff that bring ideas to life. Sometimes newspaper articles, TED Talks.

How do students of color fit into the framework of the class?

In terms of probable experience of white students vs. students of color, it often intersects with social class, so I do a survey asking them about family income. (In a recent) semester the median white family income was like $200,000 and median for black families was about $60,000. Students of color typically have a pretty good handle on race, but most of them don’t have a good idea of what social class is.

Are there sometimes tense discussions among students about what is being touched off emotionally as they volunteer in the community and keep that journal?

Yes, but to me not enough. In part, because another dynamic in a typical class is that students of color hold back on what they really feel. And many white students don’t have the vocabulary to talk about these things. A lot of them write in their journals that they don’t feel comfortable discussing certain things because they may appear to be stupid, or racist. My interpretation of that is many white students don’t usually have these conversations and they’ve been told if they talk about race, they’re racist. One way around it is I have them write questions they may have anonymously and we talk it that way. The ideas get out, but indirectly.

Has classroom willingness to speak about uncomfortable things changed over time?

It’s gotten worse. When I talk with students in private or small groups, one thing that comes out is that the message is very clearly communicated to white students that race is not something you pay attention to. If you pay attention to it and verbalize it, you’re racist. That’s a new phenomenon.

Does that change over the course of your class?

Not in the context of class, but students say they turn to family members and friends and try to educate them about the issues. That is ultimately what I want them to do.

What about enrollment in your class and in Afro-American studies? I imagine it has been boosted by the ethnic studies requirement.

Yes, but it has also kind of undermined Afro-American studies. If a course has at least 50 percent students using it to fulfill a requirement, it lowers the level of conversation, and undermines the quality of education for the majors in the department. It’s a real balancing act.

So, is the ethnic studies requirement a good thing?

It’s good for the university and society to have such things, but the people the Afro-American Studies department was created for are discriminated against again.

I was reading up on the creation of Afro-American Studies in 1970. UW-Madison was a pioneer and there were some very ambitious projections of having 1,500 students to start and 2,000 in 1973.

At that time, that made sense. Race was something everybody talked about; discrimination, the civil rights movement. There was this euphoria about getting access to power. That optimism made sense.

The announcement of the Distinguished Teaching Awards featured a brief video of each recipient. You mentioned that your favorite moment in teaching is when a student’s face lights up when they are struggling with a concept and then they get it. How do you lead them there?

First of all, I try to find out where they are. What their experience in life has been; what their take on the course is. I use information in the journals to figure out how to reach them with course concepts. There are different learning styles — some people are more linear thinking, some people need all the information before they figure it out.

The journals give you an unusual way to connect with students.

Especially the quiet ones. Often they are the best students, but they just don’t talk. In the journals, they flower.

Read the full article at The Cap Times.