Join us for a weekend of film screenings for Madison’s Asian American Media Spotlight. We will be showing three in-person films and one film via virtual screening.  Be sure to check out our in-person live discussion about Fighting for Family with the director, moderated by Choua Xiong! 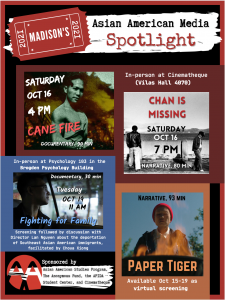 CANE FIRE (90 min) | Saturday, Oct 16 at 4pm | In-person, Vilas Hall 4070
The exotic beauty of Kaua’i has been captured in countless Hollywood productions and made the Hawaiian island a premiere site for tourism, but these industries exact a heavy toll on the Indigenous and working-class residents who have always been hired to serve as mere “extras” while their own stories go untold. Anthony Banua-Simon’s documentary Cane Fire brings together archival footage and conversations with family members and activists to provide a closer look at the island’s histories of conflict and its people’s continued struggles for sovereignty.

CHAN IS MISSING (80 min) | Saturday, Oct 16 at 7pm | In-person, Vilas Hall 4070
A groundbreaking independent film and Asian American cinema classic, Chan is Missing follows cab driver Jo (Moy) and his nephew Steve (Hayashi) as they search for their missing friend in a meandering journey through the streets of San Francisco’s Chinatown. Though director Wang’s second feature is styled as a noir detective story, it is more focused on revealing the mundane details and comic nuances of Chinese Americans and their everyday lives than solving the titular mystery

PAPER TIGER (93 min) | Available online Oct 15 – 19 | Virtual screening (Password: SPOTLIGHT2021)
Inspired by actual events, this dramatic feature film tells the story of a Chinese American mother who grows increasingly concerned about the disturbing behavior of her high school son.  His struggles over the loss of his father, feelings of alienation, and mental illness, push him further from his mother as she starts to fear for the worst.

FIGHTING FOR FAMILY (30 min) | Tuesday, Oct 19 at 11am | In-person, Psychology 103, Brogden Psychology Building
Director Lan Nguyen will be joining us virtually for a screening and discussion about her short documentary about the emotional toll of deportation.  The film tells the heartbreaking story of a refugee who is deported from the U.S. back to Vietnam, and his struggles to maintain a connection to his wife and four daughters who were left behind.  Discussion moderated by Choua Xiong.