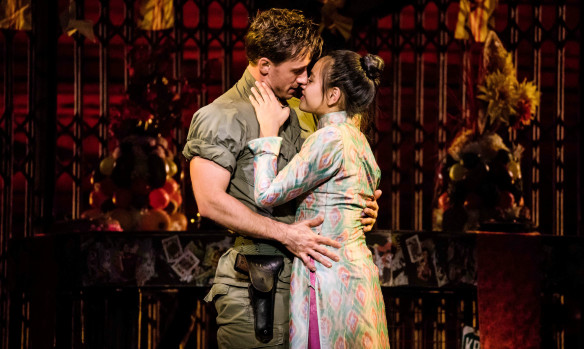 Although the musical “Miss Saigon” closed last Sunday after a six-day stint at the Overture Center for the Arts, presented in partnership with Broadway Across America, conversations surrounding Asian American misrepresentation in the musical are far from over.

Since the announcement of the show’s Madison stop, the local Asian American community raised their voices. They took action by holding an outdoor teach-in after the Overture Center canceled a planned discussion panel with Asian American scholars from Wisconsin and Minnesota.

Debuted in 1989, “Miss Saigon” is set in 1975 and tells the story of a young Vietnamese woman, Kim, who falls in love with an American G.I., Chris. However, the love develops in vain as Kim finds out Chris has started a new family in America. She then dies from suicide because of this discovery.

The musical has crowned itself “the epic love story of our time,” yet protestors said its narrative is problematic. It perpetuates hyper-sexualization of Asian women, emasculation and dehumanization of Asian men and the “White Savior” narrative storyline, according to an article written by Yu that was supposed to be published in the show’s program.

The article, “What’s Wrong with Miss Saigon,” draws from different Asian American and non-Asian American scholars’ opinions. The piece poses questions for the audience to dig deeper into the larger historical context of the musical and watch it with a different perspective.

“‘Miss Saigon’ is problematic because it romanticizes the reality,” Yu said. “It turns the trauma into a love story. The show portrays that an Asian woman has to die because she can’t live without a white man? That’s not a love story.”