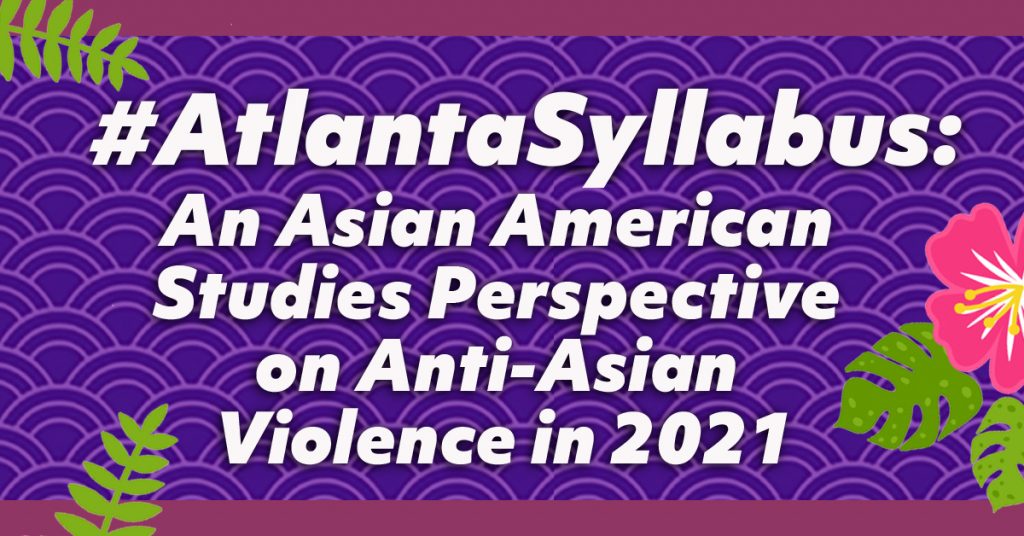 On March 16, 2021, eight people were killed at Atlanta-area spa businesses — six of whom were Asian women. Despite the fact that two of the women were Chinese and four were Korean, news media were quick to deny racist motivations. Worse yet, an official spokesperson for the sheriff’s office investigating the case described the murderer as merely having “a really bad day.” Yet as scholars of Asian American Studies, critical race theory, and feminism, we know that this kind of violence is deeply intertwined with long histories of anti-Asian hatred and misogyny in this country. Throughout the COVID-19 pandemic there had been an alarming surge in violent attacks and hate crimes targeting Asians, and these episodes must be understood within larger discourses of disease and contagion that have long surrounded Asian immigrants and our communities. And the story goes even deeper than that – this violence is also connected to the immigration policies that excluded and then welcomed certain kinds of Asians to the U.S., to the stereotypical portrayals of Asians in mainstream media, to the gendering and racializing of certain kinds of labor, and far more.

The #AtlantaSyllabus was designed for those who want to better understand this incident and this moment in all of their complexity. While Atlanta is a politically contentious space with rich legacies of Black activism, the presence of Asian Americans in the U.S. South has often been obscured in dominant narratives. Without reducing the city to this tragedy, this syllabus represents a starting point for understanding the incident in relation to Asian American history, culture, and political solidarity with Black communities. Its contents includes canonical and more recent scholarship from the academic discipline of Asian American Studies, as well as contemporary journalism, podcasts, videos, and documentaries from Asian American artists and writers.

While its creation was motivated from an incident of trauma and pain, this syllabus also points to the active role that Asian Americans have always played in asserting their own unique and intersectional identities, resisting dominant narratives, and fighting for liberation and justice. The list of works below is in no way exhaustive, and clearly only scrapes the surface of the vast body of Asian American writing and creative works that come together to tell our story. But it’s our hope that it begins to spark a more informed and sustained conversation about the experiences of Asian Americans that builds from all of the hard work that has come before.

The #AtlantaSyllabus was created by Dr. Lori Lopez, Dr. Lisa Ho, and Dr. Erica Kanesaka Kalnay from the University of Wisconsin-Madison’s Asian American Studies Program.  For more information about our program, see: https://asianamerican.wisc.edu/

Week 1:  Asian American and Pacific Islander Identities
Discussion Questions:
1. How can we think about identity through an intersectional and interrelational lens?
2. What are the different forces that challenge the cohesion and stability of Asian/Asian American Identity?
3. How can racial triangulation destabilize the Black/White binary of race?

Week 2:  Histories of Immigration and Exclusion
Discussion Questions:
1. How can we think about immigration as a technology of race?
2. Asian immigrants were excluded because of their racialization but also welcomed because of how their labor was valued–what does this contradiction reveal about how white supremacy works?

Week 4:  Disease and Contagion
Discussion Questions:
1. How can we use the theory of orientalism to explain the overlap between disease and different categories of identity such as race, gender, immigration, and others?
2. How can we use an intersectional analysis to influence how decisions about public health are made and communicated to the broader public?

Week 5: Asianizing the COVID-19 Pandemic
Discussion Questions:
1. How can we use the history of Asian immigration and exclusion to explain the ongoing anti-Asian violence and sentiment during the COVID-19 Pandemic?
2. How can we use the framework of feminism to create a system of care that addresses the heterogeneity of the Asian American community?

Week 7:  Violence and Resistance in the Everyday Lives of Asian Americans
Discussion Questions:
1. In what ways do the experiences of violence that Asian Americans encounter in their everyday lives echo broader social-historical violences, and in what ways should they be seen as distinct?
2. What can we learn from the acts of resistance, both large and small, through which Asian American activists have responded to violence?

Week 8:  Racial Fetishism and the Hypersexualization of Asian Women
Discussion Questions:
1. How has the hypersexualization of Asian American women been shaped by patterns of immigration, global commodity flows, and histories of U.S. militarism and empire?
2. How is desire enmeshed in, and sometimes constitutive of, violence against Asian American women?

Week 9:  Service Work, Sex Work, and Gendered Labor
Discussion Questions:
1. How do race and gender intersect in the exploitation and policing of service work, sex work, and other forms of precarious labor performed by Asian and Asian American women?
2. What is needed to ensure safety and justice for women who perform this labor?

Week 11:  Black and Asian Interracial Solidarity
Discussion Questions
1.  How does the ideology of white supremacy drive anti-Blackness in the AAPI community?
2.  What kind of strategies are adopted to build interracial solidarity amongst African American and Asian American communities?